duck or doorknob
An artist-curated exhibition featuring works by
Josh Blackwell, Matt Connors, Rochelle Feinstein, Bill Jenkins, Paul Lee, Elisa Lendvay, Dianna Molzan, Bruno Munari, Davina Semo, Alan Shields & Kishio Suga
September 13 – November 2, 2019
Opening: 6–8PM, Friday, September 13
2831A Mission Street     San Francisco, CA     94110 USA
Ratio 3 is pleased to present duck or doorknob, a group exhibition of new and historical artworks from eleven artists, curated by Ratio 3-represented artist Noam Rappaport. Whether working with paint on canvas, altering and combining found objects, or aggregating intricate materials, the artists whose works comprise this exhibition reconcile, rather than choose, categories.
“I am interested in how these artists explore varying relationships between painting and everyday objects and experience, bringing to light the idea that the incomprehensible is as much a part of everyday life as is, for example, a doorknob. The works in this show blur the edges between that which seems stable or legible and that which is more ethereal like mystery, inspiration, or folly. In these artists' works, the mundane and the extraordinary become interchangeable. A scrap of wood, a folding chair, or a handtowel can be more engaging than the news.”
-Noam Rappaport
Ratio 3 thanks Josh Blackwell (based in Bennington, VT); Matt Connors (b. 1973, Chicago, IL; based in New York) and CANADA, New York; Rochelle Feinstein (based in New York City) and Sperone Westwater; Bill Jenkins (b. 1981, Grass Valley, CA; based in New York); Paul Lee (b. 1974, London, UK; based in New York) and Modern Art; Dianna Molzan (based in Los Angeles) and Kristina Kite Gallery; Andrew Kreps Gallery and the Estate of Bruno Munari (1907–1998, Milan, Italy); Davina Semo (b. 1981, Washington, DC; based in San Francisco) and Jessica Silverman Gallery; Van Doren Waxter and the Estate of Alan Shields (1944–2005, Shelter Island, NY); Elisa Lendvay (b. 1975, Dallas, TX; based in Poughkeepsie, NY); and Kishio Suga (b. 1944, Morioka, Japan) and Blum & Poe for their generosity in contributing to duck or doorknob.

Delighted that my show "Rise" is in Art Forum's Critic's Picks Hiding within Cone Hole Reach, 2019, a hand mirror trimmed with Barbie hot pink reflects nothing. The mirror is encased in the sculpture’s conical, concrete-gray base, whose tiny windows allow us an equally tiny glimpse of this charming yet functionless component. This thread of playful anarchy runs throughout “Rise,” Elisa Lendvay’s first solo exhibition here, an oddball gathering of characters seemingly plucked from dreams.
Lendvay’s quasi-figurative sculptures don’t really reference the human form. Modestly sized works such as Red Net Thread, 2016—one of several pieces arranged on a square platform near the gallery’s entrance—features a spindly excrescence, like a Claymation campfire. Nearby is Anchoring (Rust Chain Crown), 2014/18, a miniature archway with a dangling (and potentially tetanus-inducing) chain; the piece could pass as an étude for Giacometti’s suspension works. The viewer is then beckoned to the show’s main room by the outstretched fronds of Wavy Modulations (Ghost Growth), 2018, a sepulchral thing resting on the floor that calls to mind a sea anemone. Fusiform, Grasslands (Arrangement), 2018, resembles a block of artist’s tools. Some are recognizable: a sponge, a paintbrush. Yet others call to mind more fantastic, even kinky, devices, such as a staircase-shaped sledgehammer, a gummy-bear toothbrush, or a gadget whose crescent-moon edge might’ve been designed for tickling.
As its title suggests, “Rise” also traffics in ascension. Floating in an aqua-colored ribcage, the bronchus-like form of Wynken, 2018, hits just above eye level. Other works shoot up out of white pedestals, as if they were unwieldy outgrowths straight from the Earth’s crust. This note of the organic crescendos in Piss Dreams / Moon Beams (Yellow Flag), 2015/19, a structure made from steel, fabric, and paper pulp—among other materials—that appears as though it’s overgrown with algae, mold, or moss. The upper register of this piece looks like an Elizabethan collar that was fashioned from an abalone shell and is riddled with holes. In this work we find another mirror, tucked beneath an orb painted a rose-quartz hue. It allows the sculpture to gaze, lovingly and indefinitely, at itself.
— Lou Ellingson
A nice review of my solo exhibit at Sargent's Daughter in Two Coats of Paint Elisa Lendvay, Cone Hole Reach, 2019, Fiberglass, aluminum, steel, paper måché, mirror, cardboard plaster, acrylic paint and medium, 45 x 12.5 x 12.5
Contributed by Liz Ainslie / For several years I have watched Elisa Lendvay’s sculptures emerge with a winning combination of grace and wonkiness from the cement floors and drywall corners of Bushwick spaces, and appear as jewel-like talismans atop the pedestals of Midtown galleries. “Rise,” Lendvay’s solo exhibition at Sargent’s Daughters on the Lower East Side, adds new dimension to her washed and tumbled found-object arrangements through thoughtful placement within the space, and the utilization of shadows in a way that agreeably hearkens back to 20th-century modern sculpture. Elisa Lendvay, Wavy Modulations (Ghost Growth), 2018, steel, copper, wire mesh, gesso, oil paint, 40 x 40 x 30 inches
The sculptures may initially present as something akin to craft-fair wind chimes, but don’t be fooled. Lendvay’s clever hand and attention to color transforms bottle caps, wire, plastic, and fabric into precise but also very adaptable forms. Her sculptures might hang from the ceiling, sit on the floor, rest on pedestals, or be mounted on the wall. The small-scale works tend to be situated in delightfully precarious positions. The larger hanging pieces incorporate heavy-looking elements that don’t normally find their way into mobiles, casting moody shadows next to floor works. The color and flatness of the wall pieces – though she uses white to impart a sense of relief – reveals Lendvay’s understanding of painting as well as sculpture. Floor and pedestal pieces, leveraging woven elements and tiny shards, twist and turn upwards. A collection of small-scale constructions set on a low platform sandwiched by two walls provides a curiosity cabinet of colorful oddities. Elisa Lendvay, Fusiform: Grasslands (Arrangement), 2018, wood, metal, plaster, clay, canvas, paper, plastic, acrylic paint and medium, marble dust, 28 x 21 x 13 inches
The overall form and narrative thrust of Lendvay’s work clearly evokes notable sculptors. In her abstraction of natural form, she resembles Brancusi, who would insist on taking his own photos of the work in order to control the contrasting shadows cast by the oblong marble shapes. In her subtle color and accumulation of objects, she bears some comparison with Louise Bourgeois, whose compilations of irregular naturalistic forms likewise seemed to embody a personal narrative. Lendvay’s work, of course, does not possess the weight and impenetrability of marble. Instead, joints and junctures reveal the practical decisions that go into creating materially eclectic sculptures. Quite intentionally, they are far from seamless. Lendvay’s pleasingly – and purposefully – awkward arraying of found objects also brings to mind some of Noah Purifoy’s installations. And her use of dappled metals operates like a static version of a Maholy Nagy piece, with the holes projecting alluring negative shadows on the wall. Deftly added paper clay and plaster convey movement – indeed, an almost dance-like fluidity. Elisa Lendvay, Piss Dreams/ Moon Beams (Yellow Flag), 2015/2019, wood steel, flattened aluminum, plaster, clay, paper pulp, fabric, mirror, gourd, acrylic paint, oil pastel and paint, 59 x 28 x 15 inches
As a painter, I have been intrigued to see sculpture move towards a kind of painterliness. Taken to an extreme, the shift can seem fetishistic. But Lendvay’s choices of color and texture are well-judged. Some of her pieces push the envelope, deploying bright yellow over black, and almost seeming to dive into the dirt whence the found objects came. Yet others are whitewashed or pastel, recalling the controlled, economical painting of Diebenkorn or Morandi. Through the chalky washes, she leaves an underbelly of industrial grit showing through, achieving an effect similar to that of a painter who lets the canvas peak through targeted brushstrokes. Certain works come together more solidly than others, and Lendvay’s arrangements can sometimes seem dashed off. But even those pieces legitimately fall into the “provisional” or “casualist” category. More broadly, they signify that she isn’t afraid to take risks by experimenting with observation and physicality in an effort to strike a complex aesthetic balance involving material, color, weight, form and relationship to surrounding space.The result is a waltz of charms and amulets, having emerged from the earth unrefined to be handled, rubbed, and hewn. Ordinary bits of buried detritus spring back to life, reaching out like craggy branches towards the sun.
“Elisa Lendvay: Rise,” Sargent’s Daughters, 179 East Broadway, New York, NY. Through September 15, 2019.
About the artist (from gallery website): Elisa Lendvay (b. Dallas, TX 1975) lives and works in Poughkeepsie, NY.  Her work is currently on view at The Samuel Dorsky Museum of Art, New Paltz, NY and has been exhibited at Underdonk, Brooklyn, NY; Giampetiero Gallery, New Haven, CT; Klaus von Nichtssagend, New York, NY and Sardine Gallery, Brooklyn, NY.  She received an MFA in Sculpture from The Milton Avery Graduate School of the Arts, Bard College, Annandale-On-Hudson, NY, in 2006.
About the author: Brooklyn painter Liz Ainslie has had solo shows at Transmitter and Airplane in Bushwick, Brooklyn, and Creon Gallery in Manhattan. She received an MFA from Tyler School of Art in 2004 and a BFA from Alfred University.
Related posts:
When old-school is new: Michelle Segre at Derek Eller
Objecthood: Joan Miró’s painted sculptures
Tuning in: Clint Jukkala and John Newman on animism, spirituality, sensory experience, and consciousness

September 6- October 6 2019
Opening Friday September 6th 6 pm- 9 pm
Elisa Lendvay and Osamu Kobayashi both work in a way that is emblematic of plant growth. For “These Seeds Breathe” at Underdonk Gallery, they have given special focus to the seed.
In Osamu Kobayashi’s paintings, the sweep of the gesture is influenced by smaller moments that in themselves hold the form that will become the archetype of the image. Radiating again and again in eternal waves. In Elisa Lendvay’s sculpture she reduces form to its nascent state. The viewer watches them grow into wild and elegant assemblages yet through each movement they reflect themselves and the delicate, absurd, and raw beauty within that energy.
The seed is the center of the idea. The seed is emanating, breathing inward and outward. The seed contains the archetype that it will carry and expand upon in each stage of its growth. The metamorphosis of expansion and contraction, an eternal flux and morphological return, gives this work life. And we are left with a breathing body. An image that lives, for it sustains itself with its own breath.
Underdonk Gallery
1329 Willoughby Ave. Brooklyn, NY
Jefferson stop on the L train


My solo exhibition, Rise, at Sargent's Daughters in NYC is up and open for viewing through September 15th 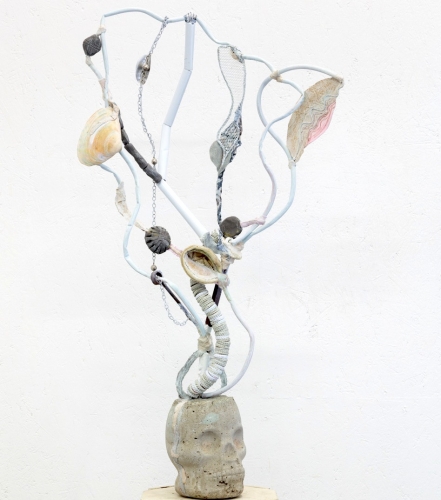 Sargent’s Daughters is pleased to present Rise, an exhibition of new sculpture by Elisa Lendvay.  This will be the artist’s debut solo show with the gallery.
Lendvay’s arrangements appear simultaneously fragile and strong, suggesting ancient shapes while employing modern refuse.  Fronds, ribs and webs weave into sight.  They may be permanent, but they may transform.  As in nature, forms are fluid.

Lendvay’s objects are writ in water; a ripple might vanish in an instant, a bone turns back to bottlecap.  They question the most direct way to approach a problem: could it be through Calvino’s “indirect vision”, allowing us to see the terrifying reality at a distance?  The objects, hopeful, protect us, free us, even as they tether us to earth.  We long to occupy their lightness.

an image cast in a mirror

Elisa Lendvay (b. Dallas, TX 1975) lives and works in Poughkeepsie, NY.  Her work is currently on view at The Samuel Dorsky Museum of Art, New Paltz, NY and has been exhibited at Underdonk, Brooklyn, NY; Giampetiero Gallery, New Haven, CT; Klaus von Nichtssagend, New York, NY and Sardine Gallery, Brooklyn, NY.  She received an MFA in Sculpture from The Milton Avery Graduate School of the Arts, Bard College, Annandale-On-Hudson, NY, in 2006.
Loading...